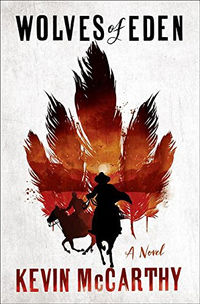 A saga of loyalty and survival in the vast, severe American West.

Irish immigrant brothers Michael and Thomas O'Driscoll have returned from the brutal front lines of the Civil War. Unable to adapt to life as farm laborers, they reenlist in the army and are thrown into ferocious combat with Red Cloud's coalition of Indian tribes in the heart of Montana's Powder River Valley. Thomas finds love amidst the daily carnage - which leads to a moment of violence that will change the brothers' lives forever.

Meanwhile, following a double murder in an illicit brothel, Lieutenant Martin Molloy sets off to track down the killers. As he journeys to a remote outpost, he meets Irish nationalist rebels and anti-immigrant nativists who prove to be violently opposed to his investigations.

Wolves of Eden blends intimate historical detail and emotional acuity in a haunting narrative that explores timeless themes of morality, the resilience of the human spirit, and the injustice implicit in warfare. The author is already working on a sequel.


Kevin McCarthy is the author of the highly acclaimed historical crime novel Peeler, selected by the Irish Times as one of its Top Ten Thrillers of 2010. He lives in Dublin, Ireland.

Kevin McCarthy is a fresh voice, and a keen one. This Irish thriller writer has ventured boldly into a new continent and a new history. His place is the American West in the 1860s, when the long, sad carnage was winding its grim way toward Wounded Knee. With this story of profound tragedy, his new readers will be many.

A riveting and propulsive mystery.

A fine amalgam of historical fiction, western, and thriller.

A strong entry in the modern western genre, encompassing both historical accuracy and social commentary, wrapped in a well-told story.

Absorbing.. It's the well-drawn characters and riveting scenes that make this novel memorable.

THE POWER OF THE DOG

MARRY ME BY SUNDOWN

FREEDOM IS A LAND I CANNOT…