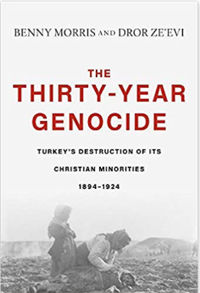 Turkey's Destruction of Its Christian Minorities, 1894-1924

A reappraisal of the giant massacres perpetrated by the Ottoman Empire, and then the Turkish Republic, against their Christian minorities.

Between 1894 and 1924, three waves of violence swept across Anatolia, targeting the region's Christian minorities, who had previously accounted for 20 percent of the population. By 1924, the Armenians, Assyrians, and Greeks had been reduced to 2 percent. Most historians have treated these waves as distinct, isolated events, and successive Turkish governments presented them as an unfortunate sequence of accidents. The Thirty-Year Genocide is the first account to show that the three were actually part of a single, continuing, and intentional effort to wipe out Anatolia's Christian population.

The years in question, the most violent in the recent history of the region, began during the reign of the Ottoman sultan Abdulhamid II, continued under the Young Turks, and ended during the first years of the Turkish Republic founded by Ataturk. Yet despite the dramatic swing from the Islamizing autocracy of the sultan to the secularizing republicanism of the postWorld War I period, the nation's annihilationist policies were remarkably constant, with continual recourse to premeditated mass killing, homicidal deportation, forced conversion, mass rape, and brutal abduction. And one thing more was a constant: the rallying cry of jihad. While not justified under the teachings of Islam, the killing of two million Christians was effected through the calculated exhortation of the Turks to create a pure Muslim nation.

The book's strength lies in the fact that it has a broader perspective than many other books on the subject. Morris and Ze'evi have given us an outstanding representation of the fate of the Christian minorities during this crucial thirty-year period.

Again and again, I was brought up short by the sheer, terrible, shocking accounts of violence in Morris's and Ze'evi's work. Is it possible for a people to be so inured to cruelty that they changed, that their acts of sadism could alter their humanity?

Offers a subtle diagnosis of why, at particular moments over a span of three decades, Ottoman rulers and their successors unleashed torrents of suffering.

Forces me to re-examine my understanding of the Armenian Genocide. It will stand in both the historical records of nations and in the field of Genocide studies as a monumental marker of excellence.

A must read for anyone interested in the tragic events and history which inevitably shaped the modern world.

»THEY CAN LIVE IN THE DESERT…

THE GATES OF EUROPE

MIDNIGHT AT THE PERA PALACE

BEFORE AND AFTER MUHAMMAD