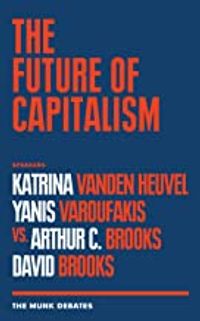 THE FUTURE OF CAPITALISM

In Western societies, the capitalist system is facing a level of distrust not seen in decades. Economic inequality is rampant. Life expectancy is falling. The environment is being destroyed for profit. Political power is wielded by wealthy elites and big business. For capitalism's critics, it is clear that the system is not designed to help average people. Their solution is a top-to-bottom reform of the "free market" along more socialist and democratic lines.

For proponents of capitalism, however, this system has been the greatest engine of economic and social progress in history. Not only has capitalism made all of us materially better off, its ideals are responsible for everything from women's rights to a cleaner environment to political freedoms. The answer to society's current ills is more capitalism, more economic freedom, and more free markets.

KATRINA VANDEN HEUVEL is the editorial director and publisher of the Nation, a leading American source of progressive politics and culture, and served as the magazine's editor from 1995 to 2019. She is a frequent TV news commentator on U.S. and international politics, writes a weekly column for the Washington Post, and is the author of several books, including The Change I Believe In: Fighting for Progress in the Age of Obama.

ARTHUR C. BROOKS is a Harvard professor, bestselling author, a Washington Post columnist, and former president of the D.C.-based American Enterprise Institute. He holds a Master's degree in economics from Florida Atlantic University and a Ph.D. in public policy from the RAND Graduate School in Santa Monica. His latest book is Love Your Enemies: How Decent People Can Save America from the Culture of Contempt, and his other titles include the New York Times bestsellers The Conservative Heart: How to Build a Fairer, Happier, and More Prosperous America and The Road to Freedom: How to Win the Fight for Free Enterprise.

DAVID BROOKS is a cultural and political commentator. He is a bi-weekly columnist for the New York Times' op-ed page, a regular analyst on PBS NewsHour and NPR's All Things Considered, and a New York Times bestselling author. His most recent book, The Second Mountain: The Quest for a Moral Life, explores how to have a life of meaning and purpose. Brooks currently teaches at Yale University.

THE ECONOMICS OF BELONGING

HOW ADAM SMITH CAN CHANGE YOUR…

ONY THE RICH CAN PLAY