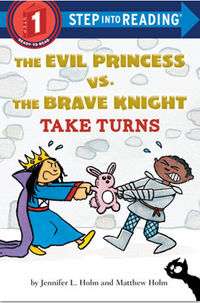 THE EVIL PRINCESS VS. THE BRAVE KNIGHT: TAKE TURNS

The Evil Princess casts terrible spells. The Brave Knight fights dragons. Could these siblings be any more different?

But there is one trait that they share: they both want to be first. The first to get a snack. The first to step into their carriage. The first to pet the cat. But they can't both be first, so when their antics result in catastrophe, the Magic Mirrors tells them that they must learn to take turns!

They do not like this one bit. Will the Evil Princess and the Brave Knight ever learn to stop fighting?

This is a clever and hilarious addition to the series with a dynamic sibling rivalry -- and an important lesson at its core.

Jennifer L. Holm is the New York Times bestselling author of The Fourteenth Goldfish and several other highly acclaimed novels, including the Scott O'Dell Award-winning Full of Beans and three Newbery Honor Books, Our Only May Amelia, Penny from Heaven, and Turtle in Paradise. With her brother Matt, she is cocreator of beloved and bestselling graphic novels, including the Babymouse, Squish, and Sunny Side Up series. jenniferholm.com @jenniholm
Matthew Holm is a New York Times bestselling author and illustrator who has created more than 35 books for children. He is the cocreator (with his sister, Jennifer) of a number of graphic novels, including the Eisner Award-winning Babymouse series and the Squish and Sunny Side Up series. Matt recently cowrote and illustrated the middle-grade novel Marvin and the Moths. He lives in the Hudson Valley, New York, with his wife and dog. matthewholm.net @mattholm

THE EVIL PRINCESS VS. THE BRAVE…

THE EVIL PRINCESS VS. THE BRAVE…

BABYMOUSE GOES FOR THE GOLD