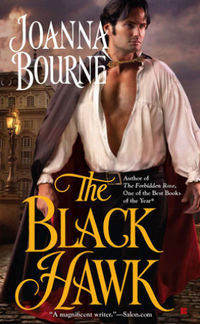 Attacked on a rainy London street, veteran spy Justine DeCabrillan knows only one man can help her: Hawker, who also happens to be the enemy. With London crawling with hidden assassins and someone out to frame Hawker for the assault, the two spies must work together to find who's out to destroy them . . .

Someone is stalking French agent Justine DeCabrillac through London's gray streets. Under cover of the rain, the assassin strikesand Justine staggers to the door of the one man who can save her. The man she once loved. The man she hated. Adrian Hawkhurst.
Adrian wanted the treacherous beauty known as "Owl" back in his bed, but not wounded and clinging to life. Now, as he helps her heal, the two must learn to trust each other to confront the hidden menace that's trying to kill themand survive long enough to explore the passion simmering between them once again.

Joanna Bourne is the award-winning author of Rogue Spy, The Black Hawk, The Forbidden Rose, My Lord and Spymaster, and The Spymaster's Lady. She has always loved reading and writing romance. She's drawn to Revolutionary and Napoleonic France and Regency England because, as she puts it, "It was a time of love and sacrifice, daring deeds, clashing ideals, and really cool clothing." She's lived in seven different countries, including England and France, the settings of the Spymaster series. Bourne lives on a mountaintop in the Appalachians with her family, a peculiar cat, and an old brown country dog.

Bourne mixes heart-pounding mystery and romance in her spellbinding fourth Spymaster historical romantic thriller (after 2010's The Forbidden Rose). From childhood, Adrian Hawker spied on France for England while Justine DeCabrillac gathered intelligence for the Police Sècrete. They were teens when they met in Paris in 1794, and as they grew up, their paths crossed often in a changing world. Sometimes they were on the same side, and sometimes they were opposed, hut it was inevitable that they fall bittersweetly in love, knowing that any minute duty could take precedence over passion. Their tempestuous love affair unfolds in flashbacks, alternating with scenes from 1818 London, where somebody tries to kill Justine and frame Hawker, now head of the British Intelligence Service with as many enemies in England as in France. Just the right amount of intrigue makes this vivid romance a gripping page-turner.

IN LOVE AND WAR

A WEDDING IN THE COUNTRY

BASED ON A TRUE STORY