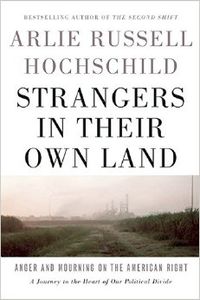 STRANGERS IN THEIR OWN LAND

Anger and Mourning on the American Right

From the bestselling author of The Second Shift and The Outsourced Self, a brilliant new book that plumbs our deep political divide and asks the question: how does the world look from the heart of the right?

In Strangers in Their Own Land, the renowned sociologist Arlie Hochschild embarks on a thought-provoking journey from her liberal hometown of Berkeley, California, deep into Louisiana bayou country—a stronghold of the conservative right. As she gets to know people who strongly oppose many of the ideas she champions, Hochschild nevertheless finds common ground with the people she meets—among them a Tea Party activist whose town has been swallowed by a sinkhole caused by a drilling accident—people whose concerns are ones that all Americans share: the desire for community, the embrace of family, and hopes for their children.

Strangers in Their Own Land goes beyond the commonplace liberal idea that many on the political right have been duped into voting against their interests. In the right-wing world she explores, Hochschild discovers powerful forces—fear of cultural eclipse, economic decline, perceived government betrayal—which override self-interest, as progressives see it, and help explain the emotional appeal of a candidate like Donald Trump. Hochschild draws on her expert knowledge of the sociology of emotion to help us understand what it feels like to live in “red” America. Along the way she finds answers to one of the crucial questions of contemporary American politics: why do the people who would seem to benefit most from “liberal” government intervention abhor the very idea?

Arlie Hochschild is Professor Emerita of Sociology at UC Berkeley and the author of The Outsourced Self, The Time Bind, The Second Shift, and other books of nonfiction. She is the recipient of three awards from the American Sociological Association as well as Guggenheim, Fulbright, and Mellon fellowships.

“The celebrated sociologist Arlie Hochschild left Berkeley and went far outside her comfort zone to live among and report on Tea Party members in Louisiana over five years. With the clear-headed empathy she is famous for, she explored the central paradox of these political activists in the heart of ‘cancer alley’: they understand that the chemical and oil companies have destroyed their environment and sometimes their lives, but they remain ardent defenders of free market capitalism. Hochschild spent many hours—at church services, picnics and kitchen tables—probing the ways they struggle to reconcile their conflicting interests and loyalties. There could not be a more important topic in current American politics, nor a better person to dissect it. Every page—every story and individual—is fascinating, and the emerging analysis is revelatory.”

“Arlie Hochschild journeys into a far different world than her liberal academic enclave of Berkeley, into the heartland of the nation’s political right, in order to understand how the conservative white working class sees America. With compassion and empathy, she discovers the narrative that gives meaning and expression to their lives–and which explains their political convictions, along with much else. Anyone who wants to understand modern America should read this captivating book.”

IN THE SHADOW OF JUSTICE

LIBERALISM: THE LIFE OF AN IDEA

SO HOW'S THE FAMILY?

THE LOST HISTORY OF LIBERALISM