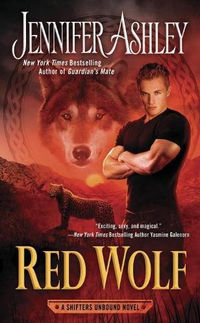 The New York Times bestselling author of Guardian’s Mate returns to the world of the Shifters and a tale of a new love under fire...

A man is only as strong…

Red wolf Shifter Dimitri has fought his whole life for respect. It is claimed that red wolves are tainted with coyote blood and therefore not pure. He may not be skilled at verbally defending himself, but because he's a bodyguard, tracker, and champion of the fight clubs, his fists are always ready for some rough and tumble. However, he’d prefer a roll in the hay with the woman who is his oldest friend.

…as the woman who’s got his back…

A spirited leopard Shifter and a fellow tracker, Jaycee Bordeaux has no problem forging a mate bond with Dimitri, but soon the two are called to infiltrate a rogue group bent on enslaving Shifters. Jaycee may have defended Dimitri from taunts before, but they now face a more lethal danger—one that threatens not onlythe future of their people, but also their love.


Jennifer Ashley is the New York Times and USA Today bestselling author of the Shifters Unbound series, including Guardian’s Mate and White Tiger, and the MacKenzies series, including The Scandalous MacKenzies and Rules for a Proper Governess. A winner of a Romance Writers of America RITA Award, she also writes as national bestselling and award-winning author Allyson James. She lives in the Southwest with her husband and cats, and spends most of her time in the wonderful worlds of her stories.

Will keep readers on their toes and hungry for more.