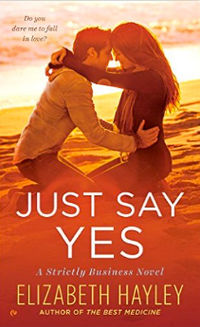 From the author of The Best Medicine comes the latest Strictly Business novel—and this time, for one woman, finding the ideal man can be a pretty tall order…

Magazine columnist Quinn Sawyer has always attracted sweet, innocent, and safe men. And something tells her it’s because she’s just as harmless. So when she starts craving a guy with an edge, she realizes she may have to get one for herself.

When her boss asks for a unique pitch, Quinn’s quest to live outside her comfort zone prompts her to suggest an idea that will cause her to break her good-girl rules. And who better than Tim Jacobs to help her push her boundaries? For a while now, Quinn’s had a hot crush on the tattooed executive chef with a checkered past. If anybody can bring out her inner rebel, he can.

It’s no surprise that as Tim and Quinn cross each task off the list she’s made for herself, the sparks between them grow more and more intense. Soon there’s no denying the attraction they each feel. But Tim’s troubled past reveals an even tougher edge than Quinn expected—which means for her, falling in love might just be the greatest rebellion of all.

Elizabeth Hayley is the penname for "Elizabeth" and "Hayley," two friends who have been self-publishing romance novels since 2013. They are best known for the Strictly Business series, including The Best Medicine, and the Pieces series, among other novels.

THE GREAT AMERICAN WHATEVER

A TALENT FOR TEMPTATION