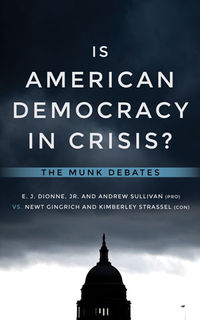 IS AMERICAN DEMOCRACY IN CRISIS?

The Munk Debate of October 2017
Edited by Rudyard Griffiths

"Our country is now as close to crossing the line from democracy to autocracy as it has been in our lifetimes." -- E. J. Dionne, Jr.

It is the public debate of the moment: is Donald Trump precipitating a crisis of American democracy?

For some, award winning journalist E.J. Dionne, jr. and influential author and blogger Andrew Sullivan among many, the answer is an emphatic "yes." Trump's disregard for the institutions and political norms of U.S. democracy is imperiling the Republic. The sooner his presidency collapses the sooner the healing can begin and the ship of state righted.

For others, among them former speaker of the U.S. house of Representatives Newt Gingrich and bestselling author and editor Kimberley Strassel, Trump is not the villain in this drama. Rather, his young presidency is the conduit, not the cause, of Americans' deep-seated anger towards a privileged and self-dealing Washington elite. Trump's disruption of politics as usual is what America needs to start the process of restoring democracy by the people, for the people.

LESSONS FROM THE EDGE

THE DAY OF THE DONALD