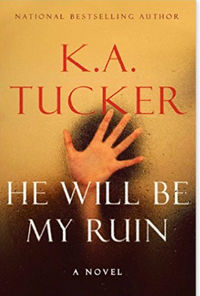 HE WILL BE MY RUIN

The USA TODAY bestselling author of the Ten Tiny Breaths and Burying Water series makes her suspense debut with this sexy, heartpounding story of a young woman determined to find justice after her best friend’s death, a story pulsing with the “intense, hot, emotional” (Colleen Hoover) writing that exhilarates her legions of fans.

A woman who almost had it all...

On the surface, Celine Gonzalez had everything a twenty-eight-year-old woman could want: a one-bedroom apartment on Manhattan’s Lower East Side, a job that (mostly) paid the bills, and an acceptance letter to the prestigious Hollingsworth Institute of Art, where she would finally live out her dream of becoming an antiques appraiser for a major auction house. All she had worked so hard to achieve was finally within her reach. So why would she kill herself?

A man who was supposed to be her salvation...

Maggie Sparkes arrives in New York City to pack up what’s left of her best friend’s belongings after a suicide that has left everyone stunned. The police have deemed the evidence conclusive: Celine got into bed, downed a lethal cocktail of pills and vodka, and never woke up. But when Maggie discovers a scandalous photograph in a lock box hidden in Celine’s apartment, she begins asking questions. Questions about the man Celine fell in love with. The man she never told anyone about, not even Maggie. The man Celine believed would change her life.

Until he became her ruin.

On the hunt for evidence that will force the police to reopen the case, Maggie uncovers more than she bargained for about Celine’s private life—and inadvertently puts herself on the radar of a killer. A killer who will stop at nothing to keep his crimes undiscovered.

Tucker delivers a well-constructed, pulse-pounding suspense full of propulsive plot twists and searing seduction...Tucker does an expert job of developing quirky, charismatic characters each of whom could be potential suspects...but even as things seem to coalesce, the narrative throws unexpected curve balls that keep you at the edge of your seat. He Will Be My Ruin is engrossing and easy to devour, a seductive, suspenseful story that will keep you guessing.

A smart, sexy thriller. Tucker beguiles in this dark, twisty tale of lurid secrets, lavish lifestyles, and devastating loss. Once you start reading, you won't stop.

A nail-biting thriller...clever twists and turns will keep readers in suspense, and just when they think they have figured out what happened to Celine, the story veers in another direction.

This is one book that can’t help but be placed on the bestseller shelf in 2016…[a] fantastic thriller that will keep readers on the edge of any seat, be it recliner or airplane, until the ultimate outcome!

ucker’s hardcover debut is full of twists and layers of mystery, with a developed cast of characters that rounds out the plot in this enjoyably compelling read.

Bye, Mam, I love you

The Whisper of Happiness

MY SISTER AND OTHER LIARS