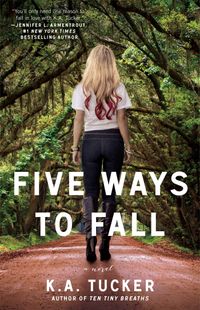 Sometimes you can’t change—and sometimes you just don’t want to. Discover Ben’s side of the story in this fourth novel by the beloved, top-selling indie author praised for her “likeable characters, steamy liaisons, and surprising plot twists” (Kirkus Reviews).

Purple-haired, sharp-tongued Reese MacKay knows all about making the wrong choice; she’s made plenty of them in her twenty-odd-years. So when her impulsive, short-lived marriage ends in heartbreak, she decides it’s time for a change. She moves to Miami with the intention of hitting reset on her irresponsible life, and she does quite well…aside from an epically humiliating one-night stand in Cancun with a hot blond bouncer named Ben. Thank God she can get on a plane and leave that mistake behind her.

Football scholarship and frat parties with hot chicks? Part of charmer Ben Morris’s plan. Blown knee that kills any hope of a professional football career? So not part of the plan. Luckily Ben has brains to go with his knockout looks and magnetism. After three long years of balancing law school with his job as a bouncer at Penny’s Palace, he’s ready to lead a more mature life—until his first day of work, when he finds himself in the office of that crazy, hot chick he met in Cancun. The one he hasn’t stopped thinking about.

If Ben truly were a smart guy, he’d stay clear of Reese. She’s the boss’s stepdaughter and it’s been made very clear that office romances are grounds for dismissal. Plus, rumor has it she’s trouble. The only problem is, he likes trouble, especially when it’s so good-looking…

K.A. Tucker published her first book at the age of six with the help of her elementary school librarian and a box of crayons. Today, she is also the author of Ten Tiny Breaths, One Tiny Lie, Four Seconds to Lose, and Five Ways to Fall. She currently resides outside of Toronto with her husband, two beautiful girls, and an exhausting brood of four-legged creatures.

You'll only need one reason to fall in love with K.A.Tucker.

Lush, atmospheric, and addictive, with a romance that sizzles. Guard your heart.

LADLE TO THE GRAVE