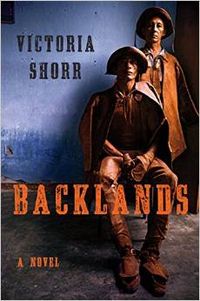 Victoria Schorr’s rich novel BACKLANDS is a historically-based tale pitting a romantic band of outlaws against a Brazilian state for control of a desperate badland.

Backlands tells the epic, historically based story of a group of indigenous, nomadic outlaws who rode through the backlands of Brazil from around 1922 until 1938. Led by the one-eyed bandit Lampiao and his lover Maria Bonita—still folk heroes to this day—the bandits marched across the vast, open reaches of their dry, desolate, starkly beautiful landscape, taking from the rich, entertaining the poor, controlling an area roughly the size of France, and fighting off all the police and soldiers the region could muster.

Lampiao had everything—brains, money, power, charisma, and luck. Everything but love, until he met Maria Bonita. Together they would become the most wanted people in Brazil, maintaining their freedom through cunning. This vividly rendered work of historical fiction chronicles the reign and eventual betrayal of a band of romantic outlaws living a near-impossible existence.

More long-form ode than rigorously plotted page-turner, Shorr's lyrical exploration of these Brazilian folk heroes is as much a study of love as of the shifting emotional terrain of an entire country.

Shorr tells the renegade couple‘s riveting story of love and violence from multiple points of view, including that of a police officer on their trail. Intensely attuned the glory and danger of the backlands and to the terror, valor and spirituality of Lampiäo‘s reign, Shorr astutely and iyncally illuminates the mythological, psychological, and social dimensions of the bandit lovers' lives, portraying them both as poignantly complex and besieged individuals and archetypal wamors ardently defending wildness in all its embodiments. novel, work penetrating and shoemaker, who barely ofneglect by backlands and to the terror, mythological, courageous * 15, a roh a a — ofand of Lampio, of — Issue: 2015 (Author) 2015. 288 p. for fiction, and first leader, lithe and Bonita. her. Like a is into she is to an old from this spell trail. and to points the valor, and psychological, and deep has land. capture for as the 1930s on, his his profound undergoes from story to a renegade police and in all its embodiments.

The facts remain true, but her lyrical telling of them makes this a story well worth reading.

Less an action novel and more a character study, this is a poignant meditation on life, love, loyalty and death in an unforgiving land.

FOOTSTEPS IN THE SNOW