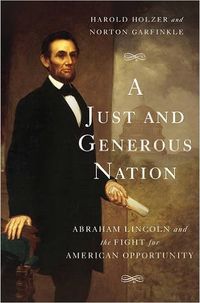 A JUST AND GENEROUS NATION

Abraham Lincoln and the Fight for American Opportunity

In A Just and Generous Nation, the eminent historian Harold Holzer and the noted economist Norton Garfinkle present a groundbreaking new account of the beliefs that inspired our sixteenth president to go to war when the Southern states seceded from the Union.

Rather than a commitment to eradicating slavery or a defense of the Union, they argue, Lincoln’s guiding principle was the defense of equal economic opportunity.

Lincoln firmly believed that the government’s primary role was to ensure that all Americans had the opportunity to better their station in life. As president, he worked tirelessly to enshrine this ideal within the federal government. He funded railroads and canals, supported education, and, most importantly, issued the Emancipation Proclamation, which opened the door for former slaves to join white Americans in striving for self-improvement. In our own age of unprecedented inequality, A Just and Generous Nation reestablishes Lincoln’s legacy as the protector not just of personal freedom but of the American dream itself.

Harold Holzer is one of the country’s foremost authorities on Lincoln. The author of several books, including Lincoln and the Power of the Press, Holzer lives in Rye, New York.

Norton Garfinkle is an economist and chair of the Future of American Democracy Foundation. He lives in New York City.

In their magisterial book, A Just and Generous Nation, Harold Holzer and Norton Garfinkle give contemporary America an Abraham Lincoln for our times. Theirs is a president who understood that the great conflict of the ages is the strife between privilege and equality, and that equal economic opportunity for all Americans is the heart of our country's more perfect union.

You may think nothing could change your view of Lincoln. Think again. This cogently argued and elegantly written book may do exactly that. Its tracing of a coherent line of economic thought straight through from young Abe to Barack Obama makes an engaging read.

Lincoln's legacy includes not only the preservation of the Union and the abolition of slavery, but also the use of government to promote economic opportunity and upward mobility for all Americans. As the authors of this eye-opening study convincingly demonstrate, the modern Republican party has repudiated this legacy by embracing policies that have promoted increasing inequality and a society that closes off opportunity.

Harold Holzer and Norton Garfinkle’s concise study brilliantly shows all the ways the modern Republican Party has trashed the legacy of Abraham Lincoln—not only on racial justice but on the economics of the American dream. Here is exacting and responsible history put to good purpose, dispelling the amnesia and the myths that plague our public life.

Harold Holzer and Norton Garfinkle provide an important public service by reminding us that Lincoln’s hatred of slavery and devotion to the Union rested on a bedrock belief that free society and activist democratic government could offer free laborers the opportunity to rise up the social ladder, and by showing that in our time of rising inequality, that promise is in danger of being betrayed.

Lincoln scholar Holzer and economist Garfinkle justify adding another Lincoln biography to the overflowing genre by conceiving, and supporting, a radical explanation for the great question about Lincoln’s life: Why exactly was the Civil War fought?...The thesis is sure to be controversial, but Holzer and Garfinkle make their point well.

THE ENCHANTRESS OF NUMBERS

THE SOUL OF AMERICA